South Dakota is located towards America's mid-western part. The city of Pierre is the capital and Sioux Falls is the largest city in the state. The state's approximate population in the year 2021 is estimated to be nearly 900,000. 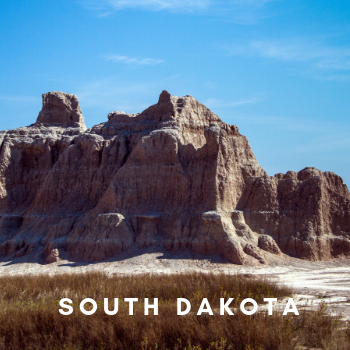 South Dakota has a 4-season climate. The temperature highs range between 40°F and 90°F, while the temperature lows go below 0 degree, which depends upon the season. The summers in South Dakota last from June until September and are generally warm; the days are sometimes hot while the nights are comparatively cooler. Because the state experiences a lot of sunshine, the state's nickname was initially supposed to be 'The Sunshine State', the emblem of which was even imprinted on its flag. However, in 1992, in compliance with the suggestion by State Rep. Chuck Mateer, the name was officially changed to “The Mount Rushmore State".

South Dakota has some of the best institutes of higher learning ranging from private liberal small art colleges such as the Augustana College, which is known to be the best in this region, to the bigger public system that consists of the famous South Dakota State University as well as the University of South Dakota.

This is the largest city in South Dakota, with a population of about 180,000. It is a city with diverse communities and is home to famous educational centers such as Augustana University, and the University of Sioux Falls. Founded in the mid-19th century, Sioux Falls was established as a city in 1883. It acquired its name from the native American tribe called Sioux. It is also known as the "Queen City". Agriculture, trade, finance, and healthcare are the main industries in this city.

With a population of about 76,000, this city is the second-largest in South Dakota. It was founded in 1876 and was established as a city in the year 1883. It belongs to Penning County. Mount Rushmore is the most popular site in this city. The South Dakota School of Mines and Technology is situated here. Other popular destinations here are Badlands National Park, Custer State Park, The Journey Museum and Learning Center, Storybook Island, South Dakota Air and Space Museum, Rushmore Waterslide Park, and more.

The city of Aberdeen was established in the year 1882. It is the third-largest city in this state with a population of about 29,000. It is home to major educational institutes like Presentation College, and Northern State University. It is also popularly known as the 'Hub City' and its major economic sectors are agriculture and manufacturing. Popular attractions in this city are Dacotah Prairie Museum, Lee Park Golf Course, Storybook Land, Mina Lake Recreation Area, Wylie Park, Aberdeen Aquatic Center, and Melgaard Park.

Named after Wilmot Wood Brookings, this city was founded in 1879. It is the fourth major city in this state with a population of about 24,000. It is known for its flourishing agriculture and business sectors. The city is also known for its affordability and safety. Brookings is home to the best university in this state, namely, the South Dakota State University. Dakota Nature Park, South Dakota Agricultural Heritage, Children's Museum of South Dakota, McCrory Gardens, Oakwood Lakes State Park, Pipestone National Monument are popular attractions in this region.

The overall cost of living in South Dakota is a lot cheaper than the national average. The cost of healthcare services is slightly more expensive when compared to the national average, whereas transportation is the cheapest. According to the 2019 statistics by the US Census Bureau, the median household income in the state is roughly $59,000, and the per capita income is around $31,000. Britton, Freeman, De Smet, Winner, Lemmon, Parkston, are some of the most affordable cities in the state.

Scholarships and grants are provided to help those students who are academically sound but lack the resources to pursue an educational career. These programs are generally categorized based on several factors such as economic need, grades, race, course, profession, etc. Students should contact the financial aid office of respective institutes, or check out specific websites for knowing the details of the most relevant scholarships. The Free Application For Federal Student Aid (FAFSA) is to be filled by all students before applying for any kind of financial aid.

South Dakota is officially called the 'Mount Rushmore State' because it attracts millions of tourists to the famous national monument. Apart from this, the state has a lot more beautiful destinations to offer such as the Mitchell Corn Palace, Badlands National Park, Custer State Park, Crazy Horse Memorial, Black Hills National Forest, Wind Cave National Park, and Wind Cave National Park. Popular foods one should never miss out on in this state are the freshly baked Kuchen, Chislic, Walleye, Beef Sandwich, and Indian Tacos. If one wishes to enjoy the warmth and sunshine of the summers, it is best to visit the state in May or June. In case, fall is one's favorite season, it will be most favorable to enjoy the state in all its colorful beauty during September, and October.